No that does not mean I have been gardening! I hate to say it but I am not a keen gardener which is why I only have a small raised flower bed in my front garden. I wish I was more into it as I love to see pretty gardens but I'm just not! Which is why this roll from Shepherd's Bush is so pretty as it brings some flowers into my life and beautiful colours:) Unfortunately when I got it all finished up into a roll and was messing with the ribbon to get it right the dragonfly button lost it's tail so I was really disappointed. 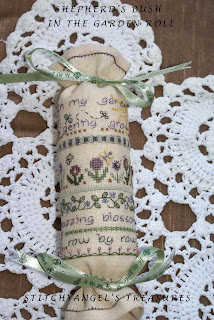 Shepherd's Bush In My Garden Roll Kit
Started 14th April 2010
Finished 21st April 2010
Another finish is the Dragon Dreams piece and I got it finished up as a bookmark. 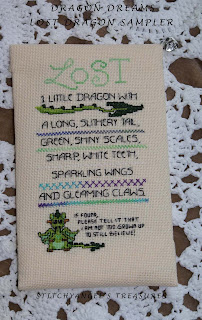 Dragon Dreams Lost Dragon Sampler
25 count fabric
DMC, Caron Waterlilies, GAST
Started 2nd April 2010
Finished 14th April 2010
I've also finished the scissor fob to go with the LHN Needle and Thread scissor bed but I haven't got the braiding done yet to sew on so will show that another time.
Onto my WIPs now and at the moment I only have three! My 10 stitches a day on Chatelaine Spring Morning just aren't happening at the moment. I just can't seem to get myself motivated to pick it up again yet but I'm sure I will eventually. This is my progress on At Home with Jane Austen by The Sampler Girl which I'm doing as SAL with Barb, Hazel, Lesleyanne and Tracy. I have done more since this pic was taken yesterday as I've had a change round of my rotation and will be stitching on this on Thursdays now. 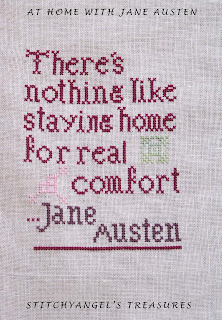 I did have a good go on Shores this weekend , my SAL with Jane and Nicki, so I'm really pleased. Block 3 seemed to take forever but it's now finished and block 4 is well on the way. The lettering seemed to go really well on this block after a bit of a shaky start! 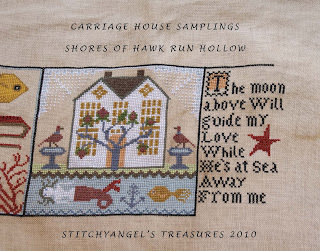 Finally a little more progress on Just a Thought Sampler Garden Casket. I'm really enjoying this as it's such a simple stitch and so pretty. I'm looking forward, though, to getting onto stitching other bits of it.

While I think on I have added the two JN charts I've stitched recently as well as the LHN to my for sale blog if anyone is interested :)
You may remember I ordered a couple of small Shepherd's Bush kits from Fobbles back in February. Well I'm still waiting! This is not Fobbles fault by any shape or from as they thought they'd have it in by mid march but are still waiting for it to arrive from Shepherd's Bush. Oh well it's not like I don't have anything to stitch in the meantime!! Lol!
Hasn't it been a lovely week here in the UK for all it's been very chilly first thing in a morning and at night?
Have a fantastic weekend everyone!
Hugs
Sally
xx
Posted by Sally at 11:36 28 comments: Links to this post

I had a very lovely pick me up through the post day today as I received the gorgeous scissors I won in Susan's giveaway. My picture really does not do them justice as they are so pretty and lovely to use. Thank you so much Susan. I plan to stitch this in pinks to match the scissors to keep them safe. I bought it the other week after seeing it stitched up on Su's blog. 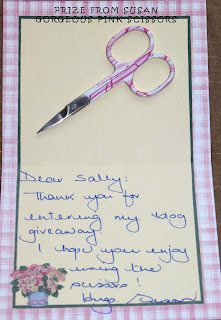 No finishes in this post but I am moving along quite nicely with my WIPs. I laughed at the comments on my last post about the mermaid being buried in the garden on Shores!! I told Abi and when she looked she said " Mum have you run over her with the car?!!!" lol. Anyway now she is safe and sound in the sea, no more looking like she's buried!!! This block is almost finished and, hopefully, will be when I pick it up next time! 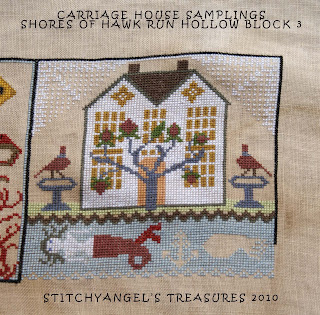 Barb, Hazel, Lesleyanne, Tracy and I started our Sampler Girl At Home with Jane Austen SAL last week and here's my start. I am loving this and this design will be the start of my Jane Austen wall :) I chose to stitch mine on 36 count flax linen and I'm using mostly DMC with a couple of Crescent Colours. 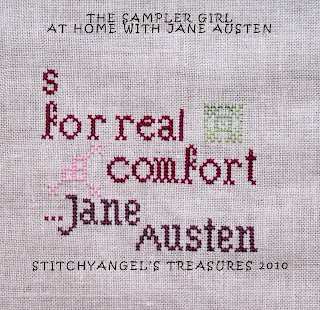 My Sampler Garden Casket is going well. This is the casket end and one side with the next end just started ( birds legs!!) I really hope I can do this piece justice when it comes to the making up!

Finally look at the cute little dragon at the bottom of this piece! Lol! This is Dragon Dreams Lost Dragon Sampler. I have actually finished this piece since I took the photo but will get it made up before I show it again. 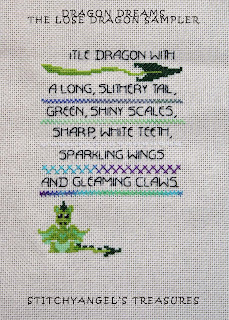 And I'm afraid I had another small new start but no piccie of that either. I started a Shepherd's Bush needleroll!!
I was supposed to be going through to meet Chris on Friday this week but I've had to cancel due to not feeling well and as it was Chris had to cancel too so we'll rearrange for another time. We were both looking forward to it too.
Hopefully I will be back with my finished up dragon piece soon and maybe even a needleroll! Who knows!! Lol!
Take care everyone!

A Lovely Package and a Finish!

I received a lovely prize package from Robin this week:) She well and truly spoilt me with everything and it well and truly made my week. Just look at the lovelies she sent! I amost lost the cute pincushion as Abi took a liking to it! Thank you so much Robin. I LOVE everything! 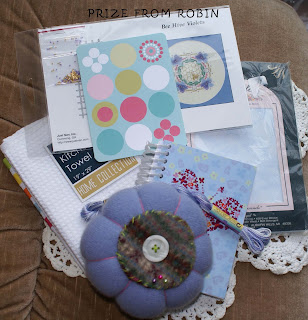 This week I had another finish and that was Little House Needleworks Needle and Thread. I absolutely loved stitching this. I love the verse, the colours, everything! I took a piccie of it before I stitched it onto the Impie Hattie and Bea scissor bed too. 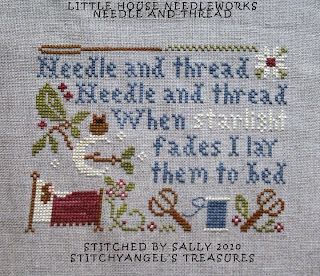 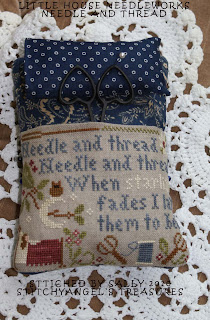 Little House Needleworks Needle and Thread
32 count linen
Gentle Arts Sampler Thread
Time now for my weekly WIPs. I do hope you're not getting sick of seing Shores yet! It's going to be a long process stitching this and block 3 seems to be taking forever!! I'm afraid the mermaid has no water to swim in yet so I hope she'll be Ok! Lol! 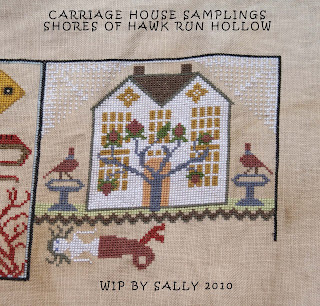 Last week I started Dragon Dreams The Lost Dragon Sampler. I am stitching this over one on 25 count fabric so I'm having to adapt it a little. I want to make it into a bookmark. 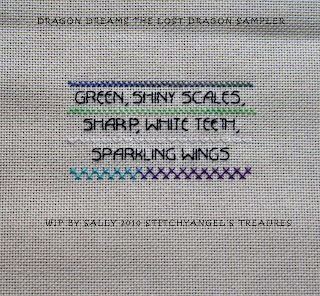 I have done almost half of one side of the Sampler Garden Casket. I do love this piece. It's so pretty with few colours. 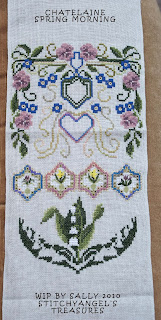 Finally just to prove that I have been stitching on Chatelaine Spring Morning here's a picture! I haven't been managing my 10 stitches a day this last week but I will get back to it next week when everything settles down again.
Today is the start of our SAL! Barb, Hazel, Tracy, Lesleyanne and I are stitching The Sampler Girl At Home with Jane Austen. I have been looking forward to this and have made a small start on it but no picture yet. I'll take one for my next post!
Well that's all for now. Thank you for continuing to visit my blog and for all your lovely comments. I love your visits and reading your comments. Makes blogging worthwhile:)
Take care everyone.
Hugs
Sally
xxxx
Posted by Sally at 21:42 26 comments: Links to this post

Yes that's what I've been doing! Building a house on my CSH Shores of Hawk Run Hollow! I absolutely love block 3 and although there is a lot of stitching in this block I'm not phased by it at all and am really enjoying it. I would love this to be my house! 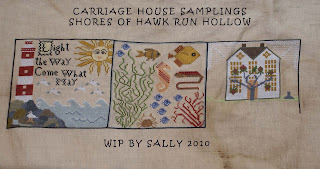 As I mentioned in my last post I basted my fabric for Just a Thought Sampler Garden Casket and this is what I managed to stitch on Sunday and Monday. This will eventually be one of the casket ends. 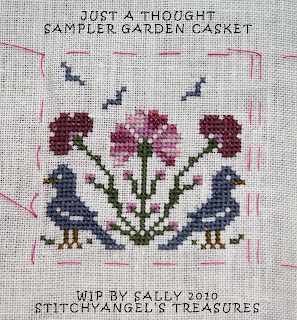 Finally more progress on LHN Needle and Thread. I have actually done more on this since I took this picture and love it. It's so quick and easy as there are only a few colours. 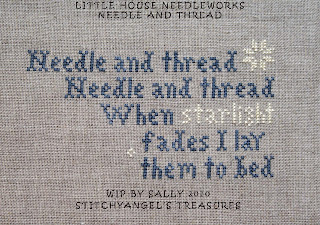 I have been so lucky of late as I have won three blog giveaways. You may remember that first off I won Christine's giveaway, then the one Robin had on her blog and now I have won Susan's giveaway for a pair of gorgeous pink scissors! I am so excited by the prospect of receiving these gifts! Thank you so much to all three ladies. I will be having a giveaway of my own within the next month or so when I decide what it's going to be!
Finally thank you so much for all the lovely comments you left on my finishes in my last post! I do love your comments and treasure each and everyone of them.
Have wonderful Easter!
Hugs
Sally
xx
Posted by Sally at 22:08 22 comments: Links to this post