The DMC box I treated myself to with some birthday money over a year ago has finally got a stitched piece mounted in the top! I've been looking for something ever since I bought it and finally found exactly what I wanted. I stitched this whilst recuperating and here it is finally mounted into the top of the box. 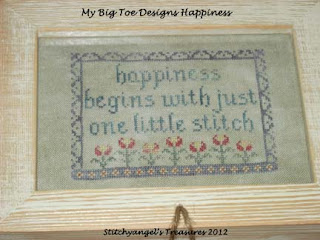 I really like the way it has turned out.

Another of my many recent finishes is also made up. A while ago I bought a couple of small canvasses that had stands with them so I mounted The Sampler Girl Queen's Diamond Jubilee Sampler onto the canvas and added some edging. Here it is. 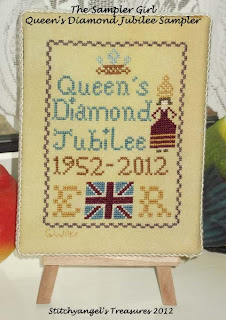 My DH even commented on how nice both finishes looked :)

I've had a couple of new starts:) First one is Just Nan Floral Fifteen which I've had in my stash ever since it came out! Not got very far on it yet but I'm loving the colours. 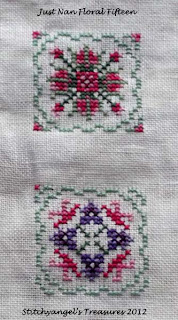 My other new start is an SB one. Once I'd finished the stitching on my SB that cannot be named I started the Snowman Treat Bag which Shirlee very kindly gifted me with. 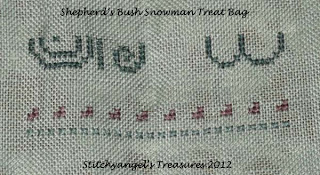 Final stitching is my almost finish on my July ornament for the Christmas All Year Round SAL. This one is Blackbird Designs 2004 Christmas Ornament from the 2004 JCS ornament magazine. I will get it finished tonight! 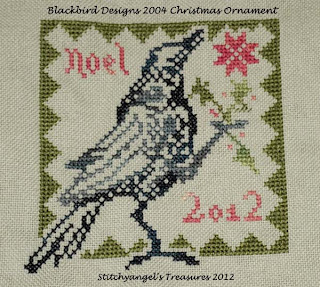 No SAL with Mouse this week as I'm waiting to start the Shakespeare's Peddler piece until Mouse is ready.

I'm still knitting on the Crest of a Wave Baktus. I'm only getting some done at craft club but it's growing quite nicely. I'm well over half way now.

Finally I've been doing a little bit of stash shopping seen as I sold some of the charts I'd finished with ( thank you to all those who bought then). I'd been wanting some fabric to stitch Birds of a Feather Sally Spencer Sampler on but was having a hard time deciding. Anyway I emailed Dawn at The Crafty Kitten asking if Fall Foliage would work. Dawn was so helpful and custom dyed me some lighter as she thought it might be too dark. It arrived yesterday and it is perfect. Thank you Dawn for your help. I have taken a photo of my floss toss but the photo really does not do it justice. 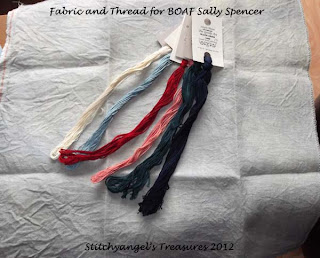 I've just done a small order with JJ's in their Christmas in July so I'm looking forward to receiving that. I ordered a couple of charts and some Crescent Colours threads :) Something to look forward to and to cheer me up lol!

That's all my news for now. I'm going to do a bit of exercise now. I bought a game for the Wii called Exerbeat and it is so much fun. Jess and I were doing it together but we found that we didn't have enough room when it came to some of it and I ended up bruised!!! I need to get myself toned up and my weight down as it's getting me down. I really don't like what I see at all when I look in the mirror!

As promised I am back with a couple of finishes today. Although I am really enjoying my knitting ( why oh why did I start knitting again??!!!! ) cross stitch will always come first :)
I am still SAL-ing with Barb but can't show what I've been stitching as it is for a private exchange that Barb and I are doing later in the year. I am , however, going to have a couple of new SB starts very soon. I have picked out the Snow Treat Bag which Shirlee kindly sent me as a get well gift to start and also sorted fabric and converted threads to DMC for My Mom's Garden.
So onto my two finishes. This first one was so lovely to stitch and is just so pretty. I love watching the birds in my garden so this was a must stitch for me. 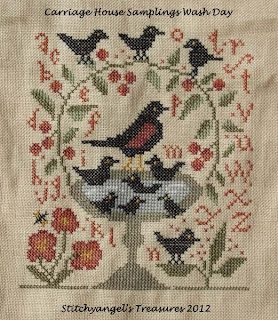 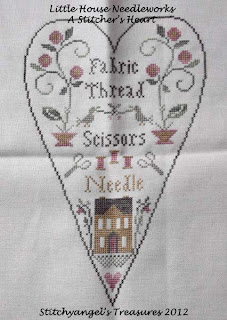 Little House Needleworks A Stitcher's Heart
32 count ivory ( I think) evenweave
Crescent Colours
Started 23rd May 2012
Finished 18th July 2012
I have finally started my ornament for the Christmas All Year Round SAL. I chose Blackbird Designs Christmas Ornament 2004 from the JCS ornament magazine of that year :) 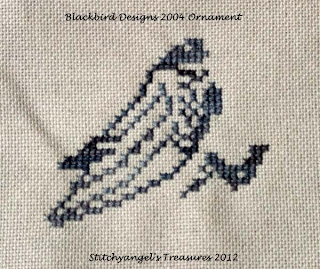 And here is Fozzie trying to get in on the act! 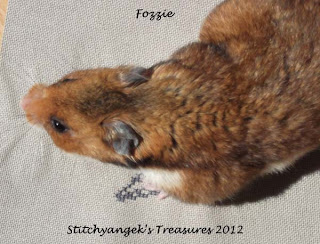 JJ's are having a Christmas in July sale next week so, as I have been pretty good so far this year, I think I'm going to have a small treat. Not sure what yet but I will be getting some threads to stitch something I already have.
Knitting now. I have finished Abi's Alderman mitts and she is so pleased with them. I've started another pair and they will be for Jess. She wants them in red and black. 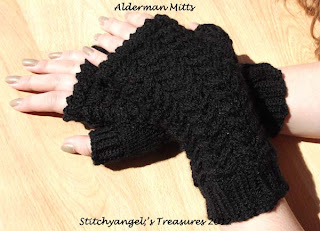 Finally my blog has been mentioned in the latest issue of The World of Cross Stitching ( thank you Emma for telling me ) in their top 3 websites. I believe this is a feature they do every issue. I picked up a copy today and was so excited :)
That's all for today :)
Until next time.
With much love
Sally
xxxx
Posted by Sally at 13:58 35 comments: Links to this post

Just a quick post today to announce the winner of the Lori Birmingham Stitcher's Needleroll chart.
The winner is....................... June!
Congratulations June :) I will contact you for your address and get it in the post to you ASAP.
I will be back hopefully tomorrow to share a finish or maybe two plus my WIP on my Christmas ornament for this month for the Christmas All Year Round SAL :)
With much love
Sally
xxxx
Posted by Sally at 16:57 9 comments: Links to this post

Birthday Gifts for Friends and Other Stories!

Sorry to have disappeared for a couple of weeks. I just haven't felt like posting but thought it was time I sorted myself out so I now have a few photos to share.
First of all it was my friend Lisa B's birthday last week. I'd had something stitched but hadn't got around to making it up so was a wee bit late sending it to her. Lisa loved it which made me very happy. 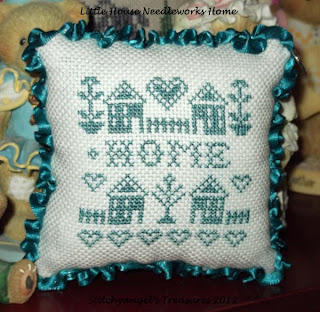 Little House Needleworks Home
Unknown fabric
DMC
Started 26th June 2012
Finished 28th June 2012
Birthday Gift for Lisa B.
Saturday was my dear friend Karan's birthday and this is what I stitched for her. 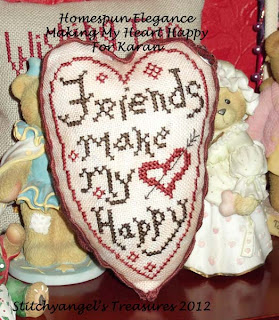 Homespun Elegance Making My Heart Happy.
32 count fabric
DMC
Started 15th June 2012
Finished 16th June 2012
Birthday Gift for Karan.
I had a lovely thank you card from her yesterday which said that she loves the heart and sentiment:) I'm so glad you liked it Karan:)
Well over a year ago Christina kindly sent me a needleroll kit she had in her stash but wouldn't stitch. I was looking through my stash for something new to start but was feeling too lazy to kit up so thought this was ideal as everything was in the kit. 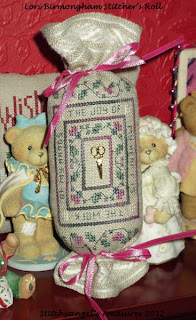 
I'd like to pass the chart and leftover threads on to someone else who would like to stitch it so just say in your comment if you'd like to :) If more than one person is interested I will pick a name :)
I've also done some finishing on a couple of bits I'd finished stitching while I could do nothing more than stitch or knit! I have to rely on Abi or Jess to lift my sewing machine out for me.
This one is Shepherd's Bush Elizabethan Needlecushion. 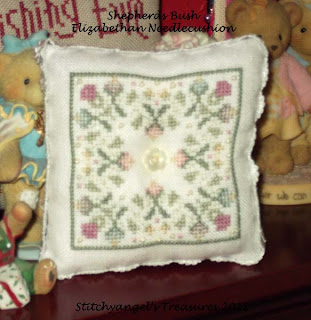 And this one is Shepherd's Bush Our Hearts Pincushion. 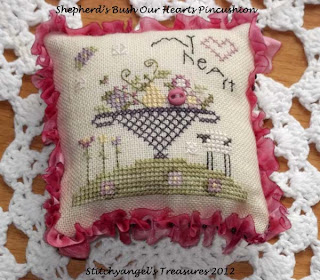 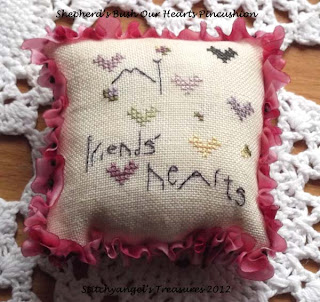 My stitching has slowed up a lot now that I am able to do a bit more and I'm getting out walking more too. I still have to behave on the lifting front but I do forget sometimes and know I've done it. I desperately want to have a good dust and clean but it's getting myself motivated to do it although Jess says he will help me and we're going to do a room a day.
Anyway back to stitching. I had a new start at the end of June. It's Carriage House Samplings Wash Day which I am thoroughly enjoying. I have done a bit more to this since I took the photo. I must admit I've got a bit fed-up with my stitching. I think because I've been able to do such a lot ( which was great if I'm honest. Who doesn't want to sit and stitch all day!) and now I have such a lot to make up which I've had a crisis of confidence with I just don't want to do it so much. So at the moment I only have 3 WIPs. Yep 3 one of which I can't show! 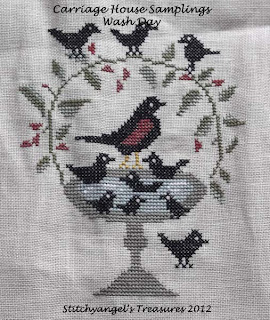 I've also been getting on with my SAL with Mouse; Little House Needleworks A Stitcher's Heart. It is almost finished then I'll start on the Shakespeare's Peddlar piece. 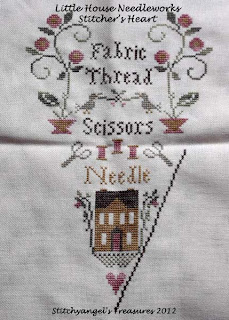 I'm trying to be good and not buy anymore new charts for a bit longer. It's hard though when you look through what you have and don't want to stitch any of it ( I do have SB stuff that I want to stitch!) but I still love what I have. So I'm going to use the money from sales I've made to kit up stuff I already have.
I have been doing some knitting. I take my Crest of a Wave Baktus to craft club with me on a Tuesday. I'm really enjoying being able to go there again. I've been searching Ravelry for an afghan to knit as I'd love to have one to hand down and found a free one so I asked my DH if he'd mind me buying some wool. I bought some on sale from Kemps so I'm good to go when I've finished some other bits. I'd also seen one in a magazine that I'd picked up at craft club when one of the ladies had brought some in for us to have but it was in two parts. Nic very kindly sent me the mag with it in so I can knit that one too! Anyway this has been keeping me busy. 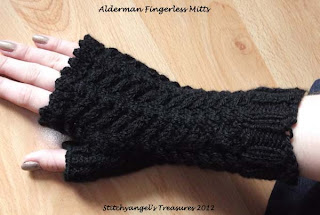 This is one of Abi's mitts. She chose them ( Alderman Mitts a free download on ravelry) but I wasn't sure I could knit them. I've never used DPNs before plus they're cabled and the thought of all those needles filled me with dread! As you can imagine I am rather proud of myself. The other one is about halfway done then I have to start on some for Jess as she has decided she would like some too but she wants hers red and black.
Last but by no means least my dear friend Michelle went to France on a stitching retreat the other weekend and very kindly sent me this lovely coaster. I have it on my little table by where I sit to stitch. Thank you so much Michelle. It's so sweet of you to think of me. 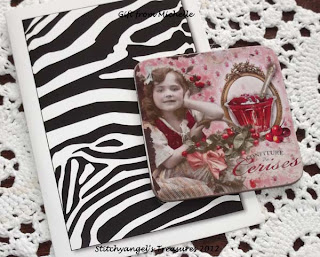 Almost forgot Abi has started up a blog. She doesn't stitch but she's using it to show her photography and just general chatter. I'd really appreciate it if you have a spare minute just to pop on over and say hello:) http://apocketfulofwonderland.blogspot.co.uk/
Well I think that's everything for now. I still have a few bits for sale if you'd like to have a look:)
Until next time.
With much love
Sally
xxxx
Posted by Sally at 10:28 35 comments: Links to this post