I'm Back but Lost and Alone.

I am back. First of all I would just like to say a huge thank you to each and every one of you who commented on my last post about my dear Dad. I wish I could give you all a thank you hug. Thanks also to those who emailed me rather than comment here and to Barb, Julie and Karan who sent cards. It has been a difficult couple of weeks and I just feel so lost and alone. Sounds silly when I say I feel alone but I am sure those of you who have lost both your parents will understand it.

I haven't felt like blogging or commenting on blogs. I have, however, been doing some stitching. Some pieces haven't seen much action whilst others have. Two of my HAED pieces I would normally stitch on for an hour one day a week but every time I sat down to pop a few stitches in something cropped up. I have some finishes to show, two of which were birthday gifts.

The first one is my final finish of 2012 and was for my surrogate sis Lisa's birthday. I had already started stitching this when I received my birthday gift from Lisa in December and although we did not stitch the same design the words were the same. " BELIEVE". 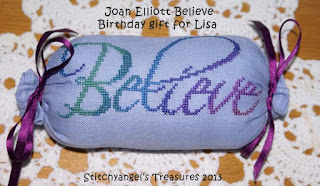 Next finish was for my friend Chris' birthday. I am terrible when it comes to stitching birthday gifts as I never know what to stitch and I change my mind so many times. I am happy to say that Chris loved it.

Homespun Elegance To Stitch is Bliss

I have also managed to finish my January ornament for the Christmas All Year Round SAL. I decided to leave the border off but now I think I'm going to add it as I have the companion piece to this which I won in Mylene's giveaway a few years ago so it'll match that if I add the border. 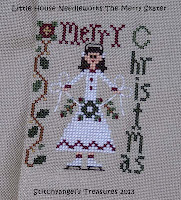 I have a wee question to ask my fellow stitchers. Does anyone know of a chart with the following verse on it.


The kiss of the sun for pardon,
The song of the birds for mirth,--
One is nearer God's heart in a garden
Than anywhere else on earth.

This was my Dad's favourite verse from the poem God's Garden. We had the poem read at the funeral service and I'd love to stitch it in his memory. I did ask on Facebook so I have seen some but I'm not keen on the ones I've seen so far.

Not sure which WIP to start with now. Hmmm. As it's SAL night tonight over in the parlour at Needlecraft Haven I think you should see my progress on Country Cottage Needleworks Gingerbread Cottage. I am trying to pick out the darkest bits of the thread for the wording but it doesn't appear to be working too well. Loving this though and looking forward to getting more done tonight. I've run out of a colour though and my local shop didn't have any so hoping they'll have it soon. Thankfully I can work round it. 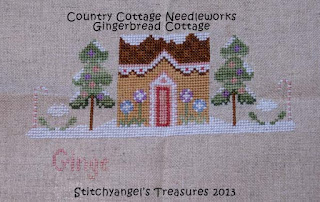 Onto my HAEDs now. I have made a lot of progress on QS Holly Fairy. I think I'm spurred on by being close to finishing page 2. 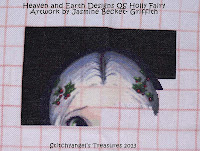 Guardian is going well. I need this angel to hold me up more than ever now so would love to make a lot more progress on this.

A little progress on SK Dragon's History. I hope to get back to some normality next week so that I can make regular progress on it. 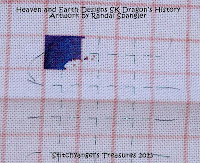 Finally Mini The Forgotten. I'm almost across the top of the first page with this but again not much progress.

So that's all the stitching I can show now. There have been some evenings when I've sat for ages playing cards on my tab instead of stitching and I really need to get out of that. One of my friends from craft club said I need to be kinder to myself and give myself time. I can't get my head round the fact that my Dad is no longer here. I think because he's been here for so many years after my Mum I thought he'd always be there. Yes there were times when he was a pain in the ass but he's my Dad and I love him dearly and I miss him so much. As long as I'm busy I don't think too much but the minute I stop my mind goes into overtime. I keep thinking I should have done more for him ( silly really as I did lots) and I should have got a doctor out on the Sunday but I really have got to stop beating myself up. He'd told the doctor in A & E when he'd asked to tell him truthfully that he'd been feeling unwell for about a week and I just wish he'd told me then he might still be here. He must have felt rotten but he didn't let it show. Even his main carer was wondering if she'd missed something but my Dad was the type of person who wouldn't tell you. I am just glad that I got the chance to say goodbye and tell him that I loved him. I just hope he heard me as he wasn't conscious.

Sally
xxxx
Posted by Sally at 13:41 31 comments: Links to this post

My Heart is Breaking

Just a quick post today. I may be missing for a wee while but I may not. My dear Dad passed away yesterday evening in hospital. I can't quite get my head round it and last night I just felt numb but it hit me this morning. He was just a few weeks short of his 84th birthday. My sister and her partner were with him but I'm afraid I could not bare to sit and watch him die. I hope he will understand that I needed to see my girls and hope he will forgive me. I said what I needed to before I left. It all happened so quickly.

And no finishes! Lol! That is very unusual for me as I usually have one or two small  ones but for me 2013 isn't going to be about lots of finishes but more about the journey of stitching and enjoying it. I have had three new starts. I've joined Lainey's Christmas All Year SAL again and have already set out my choices for every month. This month I decided on Little House Needleworks The Merry Skater and this is my small start.I'm going to try and use some charts from my stash for the SAL this year and the rest will be from the 2012 JCS ornament mag. 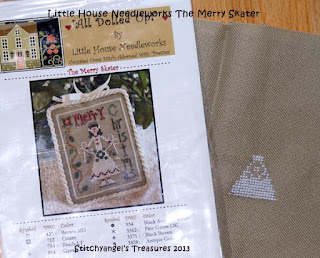 I had a new start on New Year's Day. It's a tradition of mine, as with many stitchers, to have a new start on that day. The last couple of years I've started something small that I've finished the same day but this time I've gone with one that may take me all year as I'm only going to stitch on it an hour or so a week. This is HAED SK A Dragon's History. It's not much of a start  but it's a started nonetheless. 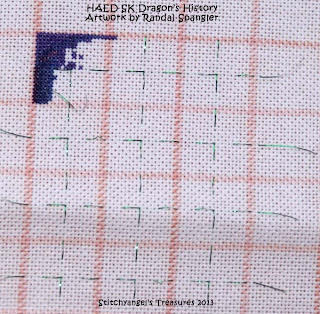 I made some good progress on HAED QS Holly Fairy. I'm determined to get this finished this year if I can. I used for be able to finish a QS in 6 months but my problem now is I have too many other things on the go. 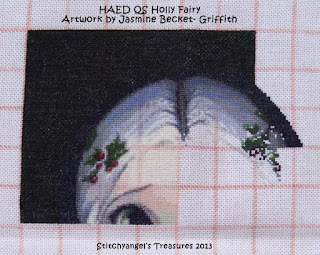 Another HAED now ( I hope you won't get bored with my HAED wips as I am really enjoying stitching them) and my start from Boxing Day Mini The Forgotten. Considering this is just a few hours stitching it's not going too badly. I actually can't wait to get to the bottom as the girl appears there. I think I shall probably just show this and A Dragon's History once a month as I'm only stitching on these about an hour to and hour and a half a week so not really worth showing them every time I blog! 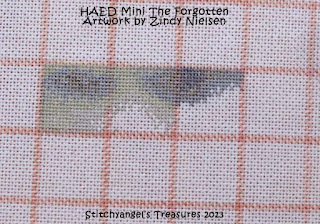 Wednesday evening saw me in the parlour with Barb and the ladies of Needlecraft Haven with Country Cottage Needleworks Gingerbread Cottage. I'm getting on quite well with this now. 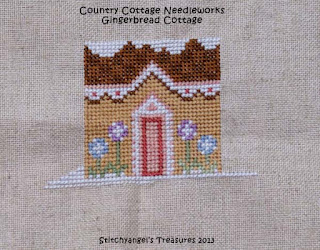 Friday and Saturday was my usual with me trying to get in many stitches as possible on HAED Guardian. Not doing too badly at all but wish I could get a page a month done! I'd have to stitch more on it though then I wouldn't get chance to stitch on much else so I'll just do the best I can. 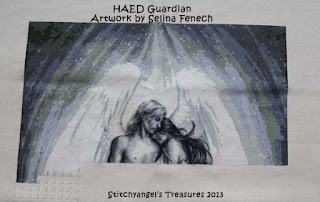 I had a final finish for 2012 but can't  show that and I had a new start last night which is almost finished but can't show that either!

I was joining in the HAED bulletin board yearly free SAL and received the first page of my chosen design which was QS Mystic Garden. Unfortunately my first reaction was I can't stitch this! I have thought about it for a few days before finally deciding that if I do it I'll hate it so I've now dropped out.

I've added a couple of charts to my for sale list if you would like to have a look. I don't want to Ebay what is left so please make me an offer and take them off my hands!!! Lol!

Last week I received a birthday gift from my long time online stitchy friend Judy. Judy was panicking as she'd posted it just after my  birthday and it hadn't arrived before Christmas. She sent a beautiful card with the most lovely verse in which she had added to and it brought tears to my eyes and a lump to my throat. I don't think kindly of myself and every year I say I need to be kinder to myself but it never happens so when someone says something nice like Judy did it just gives you a boost. She also sent me this gorgeous dishcloth which she knitted. I've never had one before and I just love it. It is too nice to use though! Thank you so much Judy xxx 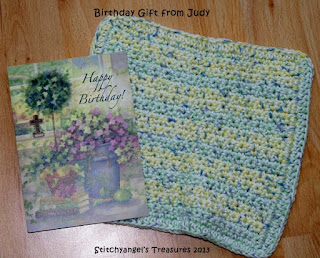 Well I think that is all for my first post of 2013. As I tidy up from the aftermath of the Christmas decorations ( the house is so dull now!)  I'm going through my stitched items and will be giving some away. My DH and I had a bit of a to do at the beginning of December about the amount of stitched pieces I have which led me to seriously think about giving up ( you may remember me mentioning in a post that I almost gave up) and at the time I could've thrown all my stitchy stash in the bin. However life without stitching would be no good for me so some of my older smalls will be going to new homes this year.

Now I'd better get on. Got to vac up and polish the living room floor!